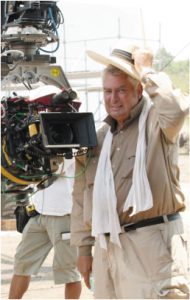 Born in Renmark, South Australia in 1943, Dean started as a TV-Studio cameraman at Adelaide’s ABC-TV. He then moved to the news department and began shooting with 16mm, and getting his first experience with film.

In 1971 he joined Film Australia in Sydney where he got the opportunity to shoot documentary and educational films. In 1974 he received wide acclaim for his outstanding cinematography of the documentary ‘A Steam Train Passes’, regarded as one of Film Australia’s most successful films, and the winner of many awards including the AFI Bronze Award, Kodak Silver Award and ACS Golden Tripod awards for cinematography.

Dean went freelance in 1981 to shoot his first theatrical feature ‘Hoodwink’, and garnered much attention for himself. This was closely followed by ‘Mad Max 2 The Road Warrior’, in which he convincingly conveyed a parched, dusty, post-apocalyptic world. In 1985 George Miller re-called him to shoot the third Mad Max film, ‘Mad Max – Beyond Thunderdome’.

Dean was also responsible for the thrilling camerawork on Simon Wincer’s ‘The Lighthorseman’ (1987), the innovative look of the Australian comic Western ‘Bullseye’ and the tension-inducing beauty of isolation of Philip Noyce’s ‘Dead Calm’ starring Nicole Kidman (both 1989). These films proved to be Dean’s ticket to Hollywood, where he went on to win the Academy Award in 1991 for his breathtaking cinematography of Kevin Costner’s ‘Dances With Wolves’. Semler also manned the cameras for Costner’s next major film, the very expensive ‘Waterworld ‘ in 1995.

Dean briefly ventured into a directorial role in 1998 with the films ‘Firestorm’ and ‘The Patriot’. However, he soon discovered his real passion was for cinematography, and promptly returned to the role of Director of Photography. As of 2010 he has been DP on 69 feature films and been the recipient of eleven major awards for best cinematography and nominated on a further nine occasions.

The Australian Cinematographers Society (ACS) is a not-for-profit company, limited by guarantee, that was formed in 1958 for the purpose of providing a forum for cinematographers to further develop their skills through mutual co-operation.