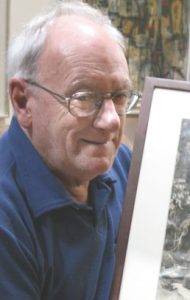 Bruce was born in Gisborne, New Zealand on 11 December 1931, and lived there until he was nineteen and then went to Wellington University doing a BA degree. He said he had no idea what he really wanted to do in life.

I wound up getting a weekend job during university holidays, painting houses. One evening I was cleaning up after painting at a house and the owner came out, “Oh God, I thought everybody had gone home, you won’t have eaten, come on in and have something to eat. I run the biggest catering business in Wellington, we always have food”! So in I went. He’d acquired a beaut Leica camera and been taking photographs. I thought these photographs were shit hot and I told him so. He said, “Wednesday night, are you doing anything”? I said, “No”. He picked me up in his yellow and green Jag and went for tea at his place. He said, “I have a one third share in a photographic business; if you feel like it we could try you out as a stills cameraman”. I said, “Oh yeah, that sounds pretty good to me. And that’s how I got started. The firm, Robert H Smith Photographers did absolutely everything from portraits, to candid, to advertising. Next thing I find, I’m missing lectures at university. By this time I had myself a room above the dark room, which was rent free. That was a very exciting part of my life.

I applied to the New Zealand National Film Unit to get a trainee director’s job. I was interviewed and told, “You’re out of luck. All those jobs are taken” Three years later in 1953 I’m sitting in the same chair in the same office. They had advertised two cameramen’s positions and I was speaking to the same boss and he was saying, “Haven’t I seen you somewhere before”? “No, no I said”. Anyway, I wound up getting the job. The training was absolutely wonderful. We spent the first three months in the laboratory, then three months going around with the cameras, three months in the cutting rooms, then learning to pull cameras apart and repair them. It was fantastic.

Bruce was once asked what advice he would give to a young up and coming cinematographer.
He answered: “Advice for a young cinematographer! It’s too late for me to give you any advice, once you’re bitten by the mosquito the disease is inside you”.

The Australian Cinematographers Society (ACS) is a not-for-profit company, limited by guarantee, that was formed in 1958 for the purpose of providing a forum for cinematographers to further develop their skills through mutual co-operation.